Things to Do in San Benito

The History of San Benito

San Benito is on U.S. Highway 77/83 five miles south of Harlingen and twenty miles north of Brownsville in Cameron County, at the approximate center of the county. The town is on the Concepción de Carricitos grant, awarded to Bartolomé and Eugenio Fernández in 1789. The portion of the grant on which San Benito is built was obtained in the mid-nineteenth century by Judge Stephen Powers in return for legal services to the Fernández heirs.

In 1904 Col. Sam Robertson went into partnership with James Landrum and Benjamin Hicks, Powers’s sons-in-law and administrators of his estate, to form what later became the San Benito Land and Water Company. In January 1907 the company subdivided town lots and began sales. Initially the town was called Bessie, in honor of the daughter of Benjamin Franklin Yoakum, financial backer of St. Louis, Brownsville, and Mexico Railways, which served the community.

The name San Benito was concocted by Rafael Moreno, an employee of Hicks. Moreno combined the given names of Robertson (Sam or “San”) and Hicks (Benny), whom he called “Don Benito.” A post office was established in 1907 under the name San Benito. The first meeting of the city council was held on July 27, 1911. A city manager form of government was adopted by charter in 1920. In 1990 the city was governed by a mayor and four elected commissioners, with a city manager as administrative head.

During the border disturbances of 1915–16, San Benito was a base for troops of the Oklahoma, South Dakota, and Tennessee National Guard. Several fights with bandits occurred in the area, involving troops and Texas Rangers. There were numerous murders and lynchings. In 1916 the night train to Brownsville was blown up at Olmito, ten miles south of San Benito, and several persons were killed.

In its early years, San Benito was a major shipper of citrus fruits and vegetables from the lower Rio Grande valley. A market was held under the arcade of the San Benito Bank and Trust Company, and agricultural festivals were popular. However, the produce industry began to diminish in the 1960s, and the last citrus-packing shed closed after the severe freeze of December 1983.

The later economy centered around agriculture and light industry. As of 1990, there were three cotton gins in San Benito, one of which was combined with a large grain storage facility. The town had a 144-acre industrial park that included such industries as electronics, plastic design and manufacture, soft drink distribution, meat packing, and clothing manufacture.

Dolly Vinsant Memorial Hospital, a community-owned hospital built by public subscription in 1949, is named for Lt. Wilma R. (Dolly) Vinsant Shea, army flight nurse, who was killed in action over Germany in May 1945. A semiweekly newspaper, the San Benito News, has been published under its present name and ownership since 1946. It was originally established as the San Benito Light in 1911. In addition to schools run by the San Benito Consolidated Independent School District, the South Texas Independent School District, a special purpose district, maintains a separate high school.

A county fair and livestock show is held in San Benito each February on fairgrounds owned jointly by the stock show corporation and the city. The population is largely Hispanic and of Mexican origin, although intermarriage with non-Hispanics is common. In addition to Mexicans, the Hispanic population includes a small but growing number of Puerto Ricans and Cubans. There is also a substantial Japanese community on the Rio Grande, outside the city limit. The black population is probably less than 1 percent of the total. In 1990 San Benito had 141 businesses and a population of 20,125, making it the third-largest city in the county. The population reached 23,444 in 2000. (source)

The City of San Benito’s Cultural Arts Department works to strengthen the quality of life by promoting a family-friendly cultural district, giving residents and visitors alike the chance to experience history, culture, music, dance, and art at various venues located at La Plaza de San Benito. The San Benito Cultural Heritage Museum features rotating exhibits showcasing the cultural arts and ethnic flavors of South Texas. The facility is part of the City’s overall Cultural Heritage District, located on the 200 block of East Heywood Street. Rounding out the Plaza de San Benito is the City’s Community Building and Auditorium, and the Cultural Arts Center. 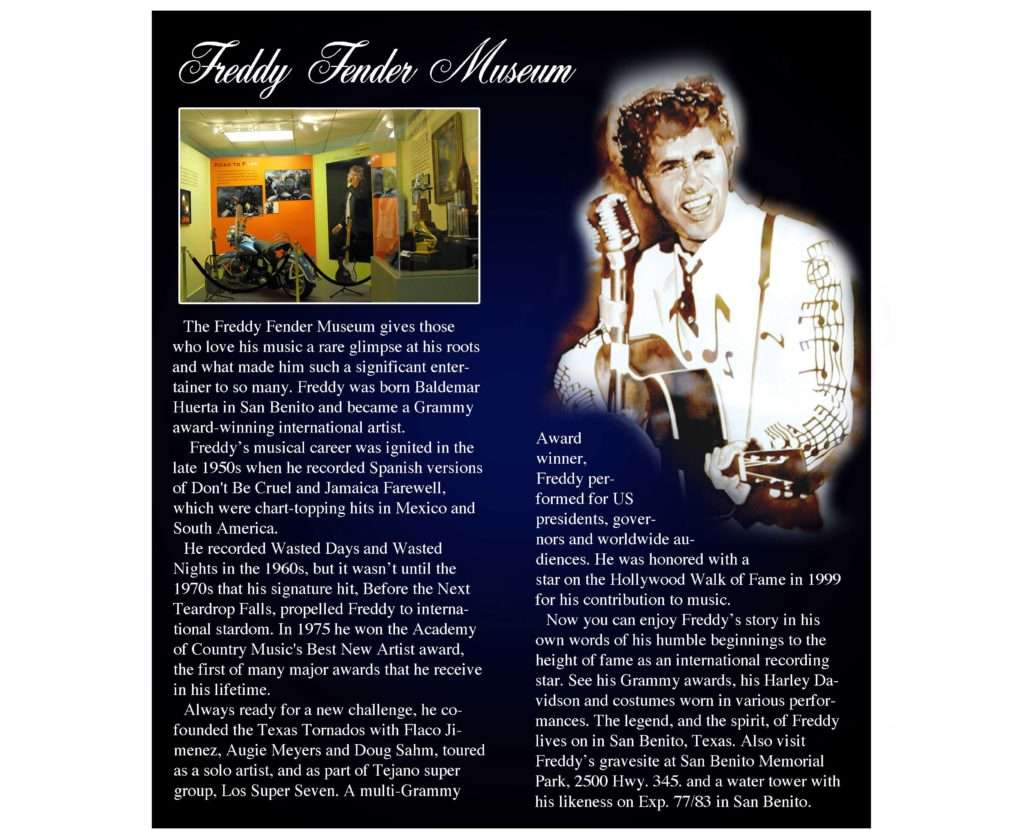